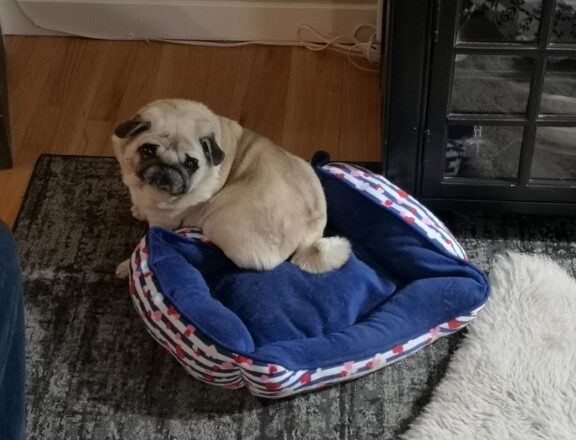 Introduction to sharing CBD oils meant for humans with dogs

With all the buzz around CBD oil the question has to come up. And that is ” Can your dog use human CBD oil?” While on the surface it seems pretty straight forward there are a couple different things to keep in mind before you give your furry buddy some of your CBD oil. Find out the good and bad aspects of sharing your CBD products with your dog in our quick guide.

Why you can share your CBD products with dogs.

If you have 100% faith in the products you are consuming that what their label states is true, then you CAN share your products with your dog. The reason is pretty simple and that is because dogs have the same endocannabinoid system that humans have. In all reality, most mammals have this same system , so in theory there shouldn’t be issues. So, if you are sure that there is very little, or no, THC in the product you can give it to them. If it is just the CBD with a carrier oil like MCT oil, then there should be very little issues encountered.

Why you shouldn’t give your dog human cbd oil

Now that we have seen why you can give your dog human cbd oil, we will focus on why you shouldn’t.

The first thing that it really it comes down to the safety and trust you have in the products you get. In the past we have seen issues of using THC Vape cartridges that come from the black market. While this isn’t an everyday thing that happens we did see a huge wave of hospitalizations that happened across the United States in the past two years. People were showing up with issues that were initially attributed to Vaping, but when the hospitals looked more into the things that tied all the patients together, it was actually due to them using vape pods they bought from so called black markets.

So while some people swear by things that are sold in less than reputable places, or made in someone’s house, it is a risk that you take. When things are made off market, they are away from labs and the strict regulations in place to keep things safe.

Human additives not meant for dogs

The next aspect that you have to think about is the additional things in the human CBD oil. It might seem like common sense, but the truth is that sometimes human oils have things in them that can be bad for dogs. This could be anything, from flavorings to additives to boost the effect of the oil on humans. Things that are ok for humans to eat, might not be ok for dogs. Onions, grapes/raisins , and chocolate are examples that humans love but will make dogs very ill.

Dosing and administration of human cbd oil for dogs

The final aspect of why you are better to give your dog cbd oils that are meant for dogs is that it will probably be easier in the long run. CBD oils meant for dogs often will have a flavor added to them. In our reviews we often see that it is either bacon, fish/seafood, or another type of meat that makes dog want to ingest the oil or treats. Dogs have very good senses of smell, so they can smell things that we can’t. So if you are having an issue getting your dog to take the oil, it won’t help them as well as if they eagerly ingested the CBD.

The last aspect of the dosing issue is that human CBD can have a higher amount per milliliter than dogs. This is because humans can sometimes deal with CBD in their system better than dogs. This isn’t to say that all dog cbd oil has low levels of cbd. Or that all human cbd oil is a lot per dose. But there is a chance that you buy an oil meant to relax you, and it’s too much for your dog. Or you get one that is too low and don’t get the benefits out of giving it to your dog.

Can vs. should you give your dog human cbd oil

At the end of the day the decision is yours as to if you want to give your dog human cbd oil. For us, the risk versus reward just isn’t there to justify it. So, to be clear, if none of the things above are causing concern for you then yes, you can give your dog cbd oil meant for humans. But if you have any hesitation at all about the things, we outline above then you probably shouldn’t give your dog CBD oil meant for humans. As one of our favorite movies of all time states “Your scientists were so preoccupied with whether they could, they didn’t stop to think if they should.” and that is somewhat how we approach this question. And as an added bonus, if you want you can have Jeff Goldblum’s voice remind you of this article if the question ever pops into your head!